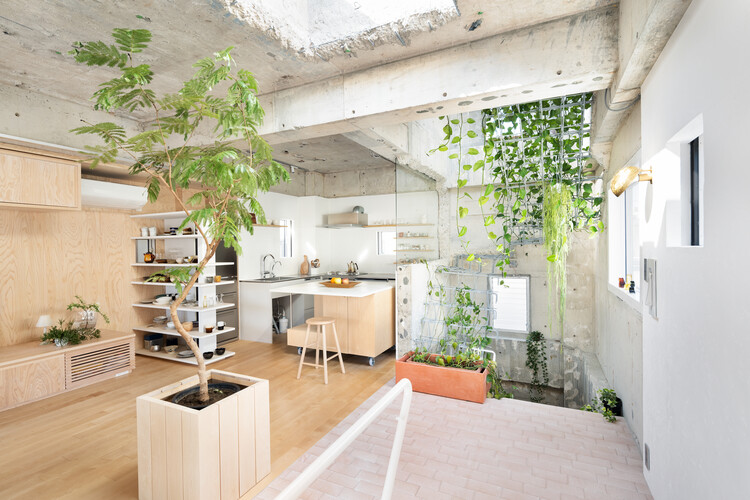 Text description provided by the architects. 33 years old, a reinforced concrete building of 3 floors with a basement has been renovated as an office and residence.

The surrounding area has been developed with bookbinding and printing-related factories. At the beginning of the building, the lower half of the building was used as a printing factory as well and the upper half was used as a residence. About 10 years ago, the whole building was converted into a house and used by a second owner. At this time the third owner renovated it again.

In this renovation, we did not design everything from the beginning but proceeded with dismantling. The elements of the past that emerged from the present finishes gave us great inspiration to design. The process of design can be said, “rediscovery”.

For example, to let in the natural light and wind to every corner of the house, we demolished a closed staircase and created a lightwell that penetrates the five floors from the basement to the penthouse. At first, the idea was to remove all the stairs, but since the reinforcing bars appeared unexpectedly beautifully during the dismantling, we left the bars as they were and created a “green staircase” that plants entwine.

In order to give a new finish to the outer wall, we tried to scrape the existing plastering finish which the second owner had added, and behind it, we found beautiful glossy tiles at the beginning of the building. We thought it would be a good contrast with the green of the newly planted trees, so we decided to polish and reuse them.

In such a way, while proceeding with demolishing, we carefully read the existing shapes and materials, and sometimes we have given new meanings to them.

Since most of the neighboring buildings are 2-stories high, we located the living room on the third floor to have an open view of near botanical garden’s great green. Bedrooms separated by a white box of bathrooms are located on the second floor. The upper two floors are split into two parts in the plan. One with a brick floor including the green staircase and actual stairs newly installed is a space for circulation, like a street in a city. The other with wooden flooring is more for private space.

The lower part of the office is still updating. It’s an experimental space where our new challenge will be implemented as a first trial, such as self-built shelves or stairs by digital fabrication method.

These items are making your home look cheap, according to interior designers