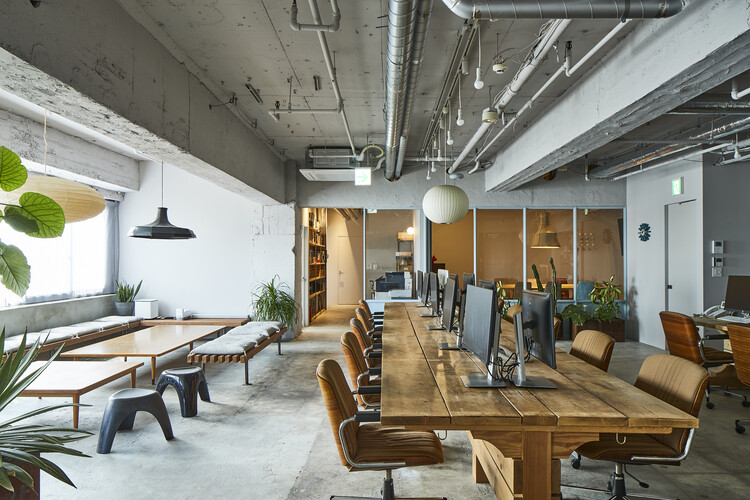 Text description provided by the architects. Roovice recently relocated its office onto the 11th floor of a 55-year-old commercial building in Kannai, Yokohama. The previous location is set to be demolished soon, therefore we had to find an alternative working space for the company. Besides, the studio has been increasing its team lately, making us look for a more generous space. Roovice’s previous office was characterized by a domestic ambiance with particular attention to spaces for employees to relax and rest. We reject the idea of a merely efficient and undistracting workplace: instead, we encourage everyone to take time for themselves and avoid stress at all costs.

This project wanted to include diverse rooms meant to allow the team to socialize and take a break when needed. A kitchen with a large counter, a living area, a small gym, a locker, and a shower were designed to make it enjoyable for the employees. The center of the plan is occupied by the desks, custom made with SPF wood, placed alongside the windows. These are meant to maintain the costs low and to resemble a Western-style antique table. The windows run through the whole facade bringing a touch of Showa Era character inside, thanks to the peculiar rounded corners commonly used in that period.

Just in front of the openings, the living area is composed of tailored mid-century-style coffee tables, surrounded by crafted ita-uba timber benches. Between the living and the kitchen, various plants and flower pots transmit a calm sensation. Combined with the majestic sight of Mount Fuji overcoming Yokohama’s high-rise buildings, the living room becomes a comfortable spot for receiving informal meetings. The kitchen develops along the southeast side of the office, perpendicularly to the staff desks creating a disconnection between the two. The custom-made kitchen table encloses the room providing enough space for sharing a meal together or hosting parties with guests. The dining area is covered in white 10 cm square tiles that were used predominantly during the Showa Era. These grant a pleasant and calm feeling as opposed to the raw texture that characterizes the other parts of the office.

The furniture has been carefully chosen and designed to make elements of different ages and tastes coexist in a timeless space. For instance, the zabuton (a typical cushion used for tatami rooms) on top of the benches is an example of merging traditional elements with newly crafted furniture. The same role is played by the noren (traditional Japanese fabric divider) that hides the storage shelf. This contrast between old and new is meant to express our philosophy towards renovation: a vintage element without its typical environment still has potential and can mold a space.

The entrance hall doesn’t head directly to the main office since it’s intended to work as noise insulation from the public units outside. Because of that, two doors in the hall lead to different spaces: the front one to the workplace and the side one to the meeting room. The latter is accessible from the main space too and is designed for providing guests with a domestic atmosphere. Indeed, the entry and meeting room pavements are the only finished floor, as opposed to the raw concrete used for the other spaces. The mid-century cupboard and seats evoke a shade of vintage, while the windows deliver a view over the entire place.

Refinement requires experience and attempts and designing our head office represented the best opportunity to push our visions and strengthen our knowledge. If your aim is to change the development of the country, first you have to make sure which way to follow.

Should I Hire an Interior Designer?

Wood Tones vs Grey Tones for Your Outdoor Space: The Benefits of Each Style

The Hidden Costs of Buying a Home

Should I Hire an Interior Designer?

Wood Tones vs Grey Tones for Your Outdoor Space: The Benefits of Each Style